As can be seen from the works quoted, Cooke was certainly resident at various London addresses until circa 1812 and various Plymouth addresses after 1817. He was certainly at 48 Union Street 1820-25 but was at 82 Union Street by 1827. Cooke is listed in Pigot´s 1830 directory[i] as engraver and copper plate printer at 82 Union Street (but under Miscellaneous) and Mrs Nile is not listed - 48 Union Street was now occupied by the baker Thomas Philips (Mrs Nile’s address in the maps and charts of 1819/1820). The map in the Tourist's Companion of 1823 only gives the address as . The (circumstantial) evidence would point to Cooke taking over Mrs Nile´s business soon after 1820 and moving along the street (to larger/smaller premises) before 1827. Robert Brindlay´s Plymouth, Stonehouse and Devonport Directory of 1830 has John Cooke as Engraver and Copper Plate printer in Union Street and has an Eliz. Nile at 85 Union Street.

Except for Cooke's New Plan Of The Three Towns (1834), no work is known by Cooke actually executed during the period of William IV, who acceded to the throne in June 1830 and who died in June 1837 – i.e. later than the map included in the Traveller´s Directory of 1828. However, we do know John Cooke of London was active for the Admiralty between 1802 and 1805 and John Cooke, Geographer, and late engraver to the Admiralty completed his General Synopsis of Geography in 1812. This was sold by a wide variety of agents including both Rees & Curtis and by Nettleton and Son, both Plymouth based companies. Rees and Curtis were the original publishers of The Picture of Plymouth (1812) and one edition of The Tourist’s Companion was published by Nettleton (1828, and two editions were distributed by firms). It would seem within the bounds of possibility that Cooke visited Devon to survey his original map(s) of Plymouth, liked the area and stayed and may have married, or gone into partnership with, Mrs Nile, before setting up completely on his own.

If John Cooke of London was born in 1765 he would have been 80 years old in 1845. All work by a John Cooke before 1812 has a London address including the map for the St Aubyn family published in 1810. Obviously in order to engrave the map, Cooke did not need to visit Plymouth but something sparked an interest in the westcountry. This John Cooke worked for the Admiralty, albeit for a relatively short period. We have 25 signed maps (the six sheets of Ireland as one map, see appended list), one atlas and a manual of mapmaking executed up to 1812 with London addresses (or no address) and no association with Devon or Cornwall. We have one map with London address showing Plymouth Dock. We do seem to have a hiatus between 1812 and 1817, but more maps may come to light. A (London) career of twenty-two years is very brief for any engraver and it looks very much as if Cooke moved to the west country between 1812 and 1817, using his London contacts for the distribution of his Synopsis of Geography (which he had doubtless nearly completed by 1812), however, we have a complete change in direction as far as work is concerned: if his pre-1812 work was a mixture of maps of all areas of the world, his post-1817 work was limited to Plymouth and surrounding areas.

We have only one work by John Cooke post-1808, not including the Synopsis, and that is the 1812-published Town of Plymouth Dock with its later replacement of date by a Plymouth address (suggesting he was not resident there in 1811) before the 1817 map of Falmouth Harbour appears, which clearly reveals residency at Stonehouse. We know of 17 maps and plans executed between this 1811-dated map and the final breakwater chart of 1847. Assuming the breakwater plan was produced between the completion of the lighthouse in 1844 and the date of 1847 (and the date and/or tonnages subsequently altered), and that John produced the plan in his 80th year, then he must have been born sometime before 1767 and this ties in with the date of birth for London´s Cooke. The information that he had worked for the Admiralty strengthens the assumption they are one and the same.

There are only two maps so far discovered from the London period with signature noting engraver to the Admiralty, there is one map from this period and the Synopsis with late engraver … – possibly this was not so important (or not expected) in the works executed for others but in his own publications he chose to use this title. Only Cooke’s Chart of Plymouth Sound, and General Guide to , Devonport and Stonehouse of 1824 notes any connection with the Admiralty until the map of circa 1840 and the breakwater chart of 1847. Between these we have the Traveller’s Directory, and Stranger's Guide with the title page Map & Chart Engraver, and Geographer Extraordinary to H.R.H. The Duke of Clarence, Lord High Admiral. Could it be that John Cooke had served under the Duke of Clarence during the latter´s office as Rear-Admiral and that a chance (?) meeting in Plymouth during the Breakwater ceremony led to the reinstating of royal patronage (even if only in name)?

The clearest connection between the two periods in question must be the similarities between the map of Plymouth Dock executed for the St Aubyn family and the map included in the first Plymouth guide book. While the first is very large at 690 x 620 mm the guide book map is only 250 x 215 mm but the similarity is startling. The engraver of the first must have exactly copied, at smaller scale, the original map. The first map has the address of Cooke and the reference to the Admiralty and the guide book brings in the Plymouth address. The lack of an address in the first state of the guide book map reinforces the assumption that Cooke moved to the westcountry during the period 1810-1817, the address being introduced for the completely new edition in 1823. 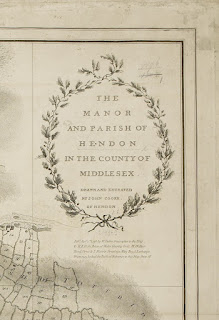 Certainly there seems to be a lot of evidence to show that John Cooke of London is also the John Cooke of Plymouth. The disappearance of work with a London address coinciding roughly with the appearance of Plymouth addresses being a good indicator but not decisive in itself. The links with the Admiralty are more pertinent: Cooke was definitely working for the admiralty in the early 1800s and the Plymouth John Cooke specifically refers to the Admiralty at a time when the Duke of Clarence was a senior member of the board. The map of Devonport made for the St Aubyn family and its reappearance in reduced format signed by John Cooke (no address) and this revised a few years later to include his Stonehouse address. It is clear to me that this is one and the same engraver and publisher and the entries in Tooley can now be updated to award him the recognition he deserves.
Link to III.A: Family Life.

[i] Pigot and Co.´s National Commercial Directory, 1830. William Byers, 32 Fore St. Devonport, is included as (printer) to his Royal Highness the Duke of Clarence.

John Cooke                                         INTRODUCTION JOHN COOKE – from London or Plymouth?   I first became interested in the engraver John Cooke while doing some research on the building of Plymouth Breakwater. [1]  I managed to acquire a number of maps and plans depicting this monumental enterprise and Cooke´s name appeared several times. The name Cooke is certainly not rare. However, there appeared to be two or even three engravers of that name around this time, with two operating from London, the other from Stonehouse, Plymouth. According to Tooley´s  Dictionary of Mapmakers  there seemed to be a father and son team [2]  of John and Charles Cooke in London as well as a possible second John in London and yet another one in Plymouth.  The father and son partnership in Tooley clearly refers to John Cooke of Paternoster Row (the Drury Lane address quoted being incorrect). John trained under Alexander Hogg and published part works. His son, Charles (1750-1816), succeeded hi
Mehr anzeigen
- September 27, 2020
IV. Short List of Cartographic Works by John Cooke   1. A NewMercators Chart of the Coast of Ireland . Six large folding charts on 2 sheets joined engraved by J Cooke. Four charts are dated between January and June 1790. Published London , D Steel, 1790. [i]   2 . A Map of the Roads from London , to Mill Hill, & Barnet . By John Cooke Engraver, at Mill Hill, Middx. Signature: Plan & Writing Engraved by J Cooke . 1792 . 3a. Plan of thePosition of the Confederate Armies under the Direction of Earl Cornwallis before Seringapatam, from the 5th to the 24th February, 1792 when the Cessation of hostilities took place including the Position of Tippoo Sultan's Army previous to the Action of the Night of the 6 th and the Subsequent Operations of the Siege. . 3b. Planof Bangalore with the Attacks taken by the English Army under the command of the Rt Honble Earl Cornwallis, KG &c &c &c, March 22nd 1791 . Both maps signed: Engraved by J. Cooke Mill Hil
Mehr anzeigen
- September 30, 2020

I. London   Except for the published works which have been discovered, not much is known about John Cooke´s life. We do know that John Cooke was the son of Ann and John Cooke of Fetter Lane, a shagreen-case-maker [i] . He was baptised 1 st August 1765 at St Andrew in Holborn, London, three years before a brother, Stephen William, who also became engraver. He was apprenticed to the bookbinder Mary Cooke, also of Fetter Lane on 7 th September 1779 at the age of fourteen (normal practice in those days). However, he was turned over to William Wells, an engraver, of Fleet Street on 6 th November 1787 “and to John Russell, by whom he was freed the same day” which points to some kind of special arrangement. Russell himself was a well-known engraver and it may be that his influence led Cooke in that direction. Between 1787 and 1812 John Cooke worked as an engraver from a number of different London addresses. Considering that he had a number of apprentices himself during this period, i
Mehr anzeigen