JOHN COOKE – of London and Plymouth

An avid collector of Devon guidebooks I soon became aware that a certain John Cooke had either engraved or engraved and published plans of the city of Plymouth or of its breakwater. Some of my research was later put into an article about the Plymouth Breakwater.[1] I had managed to acquire a number of maps and plans depicting this monumental enterprise and Cooke´s name appeared several times. The name Cooke is certainly not rare. However, there appeared to be two or even three engravers of that name around this time, with two operating from London, the other from Stonehouse, Plymouth. According to Tooley´s Dictionary of Mapmakers (the most reliable source at that time) there seemed to be a father and son team[2] of John and Charles Cooke in London as well as a possible second John in London and yet another one in Plymouth.

In the course of my research I had the good fortune to come into contact with Laurence Worms. He is one of the leading experts on British engravers and in the meantime had compiled a list of John Cooke´s work and, like me, was convinced that the entry in Tooley was incorrect. The first edition of this present work was a result of the extra input he was able to provide. We were able to prove beyond doubt that one of the John Cookes of London was also the John Cooke who was responsible for the Plymouth output.[3] However, we were not able to piece much of his family life together.

In spring 2021 I was very fortunate that Dr Shirley Atkinson contacted me about John Cooke shortly after I put his work on the internet. She is directly descended from John Cooke via his second son Edward. Dr Atkinson was able to furnish me with copies of many of the documents that had been lacking when I wrote the first edition. Since our first contact she has provided me with more information and this second edition has been completely revised to include the facts – and also some speculation – about John’s life.

In the course of including Dr Atkinson’s material I have taken the opportunity to add new information which has come to my attention since the first edition; this includes one new map (entry 24A). I also removed some of the detailed information on maps and plans from the early sections; detailed analysis of each map will be found for the relevant entry.

Any errors in transcription or interpretation are all mine and where I have taken the liberty to speculate, I hope I have clearly indicated this. Acknowledgements for contributions and illustrations are included and I am indebted to all those who furnished me with details, however trivial.

IMPORTANT: To view the individual maps begin by opening Part IV. Short List. This has links to each map listed in chronological order.

Click the link (blue) to go directly to the following chapter.

A Summary of John Cooke´s life

VI. List of Apprentices taken in by John Cooke

Apprentices taken on by John Cooke

Thanks to those who have made this possible

Notes on using my Blog.

1. Maps are numbered in sequence as used in my monograph lodged with DevA, WDRO and BL and other major libraries. See Chapters IV and VII.

Map 24A was originally thought to be by or for Byers and was added later when it transpired it was a Cooke plan.

2.  Ignore dating. To run sequentially I had to "fiddle" the publish date.

3. If you are aware of further works by Cooke, please let me have details. If you notice any mistakes (there are probably many) also contact me at KitTheMap@aol.com.

Popular posts from this blog 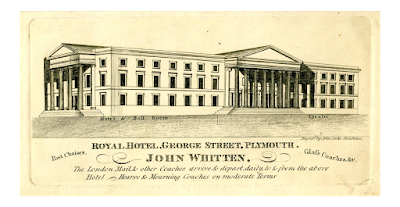 II. Plymouth     The first guide book to any of the Three Towns is generally regarded as being The Picture of Plymouth; the text of this guide is credited to Henry Woollcombe (1778-1847), a local Plymouth resident and Attorney at Law of Frankfort Street, who founded the Plymouth Athenaeum and became Mayor of Plymouth (1813). [1] This guide was first issued by Rees and Curtis and contained one small map, The Town of Plymouth Dock 1811 ( 20 ) signed by John Cooke as engraver. There was no immediate reason to think John Cooke was local as the book was also sold by Longman, Hurst, Rees, Orme, and Brown, a well-known London group of publishers and booksellers. With much expanded and revised text this was reissued as the Tourist's Companion (published by Granville & Son of Plymouth-Dock) with Cooke’s map and a second map in 1823 and 1828 ( 20 ). Significantly, for the second issue the date ( 1811 ) was deleted but New Road Stonehouse Plymo was added to Cooke’s signature. Thi
Read more
- September 30, 2020

JOHN COOKE – 1765 - 1845   I. London   For a long time John Cooke (1765-1845) was largely overlooked. At the end of the 18 th century there was a father and son partnership printing in London and publishing works which were fairly popular in their time. Tooley’s influential work on the mapmaking trade [1] had over 10 entries for the name Cooke and the first listed a father John (1731-1810) and his son and successor Charles Cooke (1750-1816). John was listed as Engraver, draughtsman , and publisher of London and this was followed by a list of London addresses. Charles was listed under Publisher of No.17 Paternoster Row . All of the addresses given for John the father and the three works noted all belonged to a different John Cooke. The works attributed to Charles were correct and included George Alexander Cooke’s (no relation) The Modern British Traveller (1802-1810), the Topography of Great Britain as well as an atlas, the Universal System of Geography . All of these works were
Read more